The cover I envision for This Desperate Place... 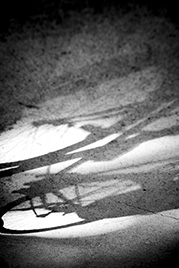 'Luv Story' out in the anthology Dreaming in the Dark.

And now for a spot of jail time. My writer’s residency at the Old Melbourne Gaol begins.

Thank you artsACT for the project grant to complete my next novel!

'Hole', a story about an intense first love in a country town, is now in the Review of Australian Fiction, Vol. 8 Issue 3.

The Courier's New Bicycle has been shortlisted for the Ned Kelly Award for Best First Crime Fiction, and is on the shortlist of the Davitt Awards for Best Adult Crime Fiction.

The Courier's New Bicycle has won the 2012 Australian Ditmar Award for Best Novel. Heartfelt thanks to all the voting readers.

The Courier's New Bicycle has been announced winner of the Aurealis Award for Best Science Fiction Novel.

The Courier’s New Bicycle has been selected for the Honour List of the 2011 Tiptree Award.

Meet the author at The Word is Out, the Midsumma Festival, Melbourne: ‘An evening with writers writing about Melbourne’ @ Hares & Hyenas bookshop Feb 1.

The author's revised version of 'Cassandra's Hands' is in the new Escape anthology for Spineless Wonders Press.

'Trouble in Nine Acts' has just won the Scarlet Stiletto Awards Judges' Prize. All proceeds will be spent on good coffee.

'By Any Other Name', a story about nostalgia, is now in the Anywhere But Earth anthology.

'Falling through the genre cracks and finding Wonderland', an article about genre and gender labelling, is out now on Overland Literary Journal's website. You can read it here >>

Kim will be a Guest of Honour at the SheKilda Australian Women Crime Writers’ Convention, the Rydges Hotel Carlton 7-9 Oct.

Hear an excerpt of The Courier's New Bicycle read by the author @ The Varuna Writers' House writer-a-day project.

The Courier’s New Bicycle is in the bookshops! It's garnered a four-star review by Australian Bookseller & Publisher, and 'pick of the week' in The Sydney Morning Herald.
read more >>

'Tripping Over the Light Fantastic' has been rebroadcast on ABC Radio National's Sunday Story program. A self-confessed dance tragic auditions for the After Dark Dance Studio, a place that is not what it seems.